International Scientific and Technology Advisory Board (ISTAB) on Underwater Munitions (UWM’s), The Hague, The Netherlands;

The purpose of the board was to provide independent advice to the Government of Lithuania on scientific, technical and organizational aspects of dumped chemical munitions in the context of Lithuania’s efforts to promote dialogue and bilateral and multilateral contacts in this area amongst interested governments and international organizations, including the European Union, the OPCW, other relevant international organizations and the United Nations. The situation for underwater munitions is continually changing from a lack of understanding to a position of knowledge, including the continual development of new and emerging marine technologies. With that in mind, the ISAB was disbanded, and a new board was created, International Technology Advisory Board (ITAB) on Sea Dumped Weapons (SDW’s), The Hague, The Netherlands.

The board consists of members who are scientists, academics and officials representing ten nationalities and who act in their personal capacities. The ITAB, officially provides independent advice to International Dialogues on Underwater Munitions (IDUM), United Nations, commissions, international bodies and organizations, universities and colleges, and the international community and public as a whole.

Dr. Stock has been working as an expert in chemical disarmament and arms control from 1987 – 1996. Between 1988 and 1996 he was Researcher and Project Leader for the Chemical and Biological Warfare Project at Stockholm International Peace Research Institute (SIPRI). Here Dr. Stock conducted research in the following areas: old and abandoned chemical weapons (CW), toxic armament wastes, destruction of CW, alternative CW destruction technologies, toxicology of CW agents, industry verification, analytical verification techniques, national implementation of the Chemical Weapons Convention, developments with respect to the strengthening of the Biological Weapons Convention and chemical terrorism.

He is in deep familiarized with the OPCW requirements for CW destruction, OCW and ACW, etc. Dr. Stock has extensively published on various issues of analytical chemistry, arms control and disarmament, old and abandoned CW and CW destruction. Besides his analytical background is has knowledge in toxicology questions and decontamination of CW.

Dhr. Jan Willem Broekema, ITAB Strategist
After finishing his military service (1975) Jan Willem Broekema (born 1953) went to study biology, with emphasis on marine biology. His major degree included whales and dolphins (1982). He chairs the Marine Mammal Working Group (1984) and was a co-founder and (council) member of the European Cetacean Society (1987-2008). At the same time he wrote a meta-study on the risks involved with privately breeding edible crops on polluted soil (1983).

Retired, Col Peter Courtney-Green,Consultant in the field of ammunition and explosives
•MBE (Member of the British Empire) (1983)
•OBE (Officer of the British Empire) (1987)
•NATO Meritorious Service Medal (2005)
Former UK Officer with first-hand experience dumping of munitions in North Sea and Master Theses for Military War College on Dumping of Sea Dumped Weapons in the North Sea.

(revised and expanded edition in preparation).

Dr. Jacek Beldowski, Polish Academy of Sciences, Marine Biology, Ecology and Limnology
Jacek Bełdowski – Graduated from University of Gdańsk in 1998 r., obtaining his Master degree in Marine Biology. Since 2000 employed as a researcher in the Institute of Oceanology Polish Academy of Sciences. In 2004 he was awarded Ph.D. in Earth Sciences, Specializing in the Mercury Pollution of Marine Ecosystems. He has led several dozens of Baltic and Arctic Expeditions, and participated in several international Research Projects – both in Institute of Oceanology PAS, and in the Leibnitz Institute for Baltic Sea Research, Warnemuende, on 2 and half year long post-doc stay. Since 2011 he is a coordinator of EU funded Chemical Munitions Search & Assessment (CHEMSEA) project, dealing with chemical munitions in the Baltic, and since 2013 he became the director of NATO SPS project Towards the Monitoring of Dumped Munitions Threat (MODUM). Right now Coordinates EU Interreg project Decision Aid on Marine Munitions – DAIMON

→   Chemical Munitions – from Search to Monitoring

Dr. Kela Weber, Associate Professor, Royal Military College of Canada
Dr. Weber is an Associate Professor in the Department of Chemistry and Chemical Engineering, and Director of the Environmental Sciences Group (ESG), at the Royal Military College of Canada. Kela is a practicing professional engineer and actively engaged in several scientific organizations including the IWA Specialist Group on Wetlands for Water Pollution Control, the Canadian Society for Chemical Engineering, the American Chemical Society, and the Society of Wetland Scientists.

MSc. Elisa Perpignan, ITAB memberhttp://underwatermunitions.org/wp-content/uploads/2017/12/Elisa.jpg
Brazilian Biologist with a great interest in everything related to conservation. In her Master’s at the University of São Paulo, she studied animal behavior in a context of vulnerable habitat. She recently specialized in sustainability by the University of Cambridge, and she is now developing a research at TU Delft in this area. For more than 10 years, she has been working with science divulgation in zoos, science fairs and NGOs, because she believes increasing the public awareness about fundamental questions is key to our future.

Dr. Ralf Trapp, Consultant, Chessenaz France
PhD in chemistry, Technical University Merseburg 1978; Dr sc nat, GDR Academy of Sciences Leipzig 1986; 13 years in senior positions at the Organisation for the Prohibition of Chemical Weapons (OPCW); today works as independent consultant on chemical and biological arms control, safety and security; has provided consulting services to international organisations (United Nations, the OPCW, the WHO and others), the European Commission, government institutions including Spiez Laboratory and the German Foreign Office, and research groups including at SIPRI and the universities of Bath, Bradford and Sussex. 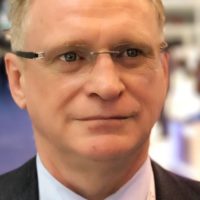 Olivier Mattmann, Hotzone Solutions
Olivier Mattmann has been Hotzone Solutions’s CEO since May 2010. His professional background includes 16 years with the Organization for the Prohibition of Chemical Weapons (OPCW), where he acted for six years as international Team Leader Inspector Chemical Munitions Specialist and developed extensive experience of training CBRNe and other specialize team in real environment. His responsibilities included the planning, preparation and implementation of the training of inspectors; the execution of live agent trainings with chemical warfare agents; radiation protection; analytical chemistry; nondestructive testing evaluation of munitions/containers/IEDS. Olivier Mattmann also worked for four years as a military officer in the NBC platoon, where he worked in close relationship with the French protection civil for the development of policies, scenario and emergency procedures for the response to terrorist and hazardous material incidents. He has a bachelor of science and an Engineer Diploma in Nuclear Physics from the Delft Technical University in the Netherlands.